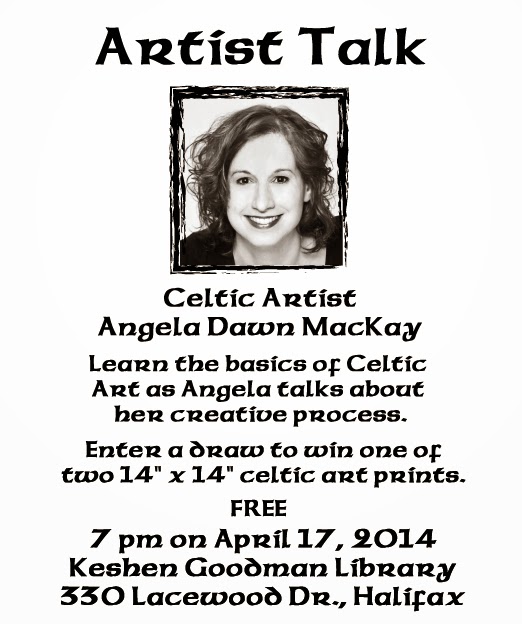 Posted by Angela Dawn MacKay, Holistic Psychologist, Writer, and Celtic Artist at 3:21 AM No comments:

April is poetry month! Come celebrate poetry and the arts at my art show at the Keshen Goodman Library. Bask in the wisdom of the great writers, from T. S. Eliot to Mother Goose to Edgar Allan Poe. 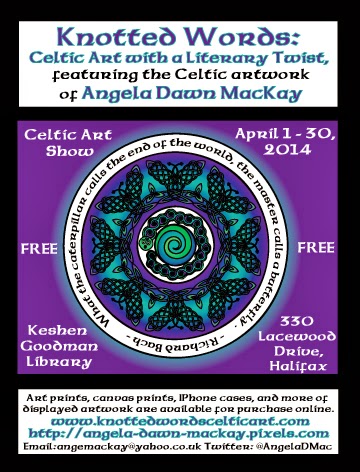 
Posted by Angela Dawn MacKay, Holistic Psychologist, Writer, and Celtic Artist at 8:47 AM No comments:

Why Dystopia? How Dystopic Fiction Can Help You Improve Your Relationships, Gain Perspective, and Appreciate Your Precious Life

So last spring, when I was eight months pregnant, I had picked up this book, The Passage, by Justin Cronin, at a used book sale. I bought it because Stephen King had reviewed it, saying "Read this book and the outside world disappears." As a lifelong Stephen King fan, I trust him, and if he says it's good, then it's got to be. And so I purchased The Passage without a second thought.

But Stephen King's endorsement was not the only thing about The Passage that had caught my attention. The back cover blurb was utterly intriguing, one of the best I had ever read, so good, in fact, that I just have to include it here:

Deep in the jungles of eastern Colombia, Professor Jonas Lear has finally found what he's been searching for - and wishes to God he hadn't.

In Memphis, Tennessee, a six-year-old girl called Amy is left at the convent of the Sisters of Mercy and wonders why her mother has abandoned her.

In a maximum security jail in Nevada, a convicted murderer called Giles Babcock has the same strange nightmare, over and over again, while he waits for a lethal injection.

In a remote community in the California mountains, a young man called Peter waits for his beloved brother to return home, so he can kill him.

Bound together in ways they cannot comprehend, for each of them a door is about to open into a future they could not have imagined. And a journey is about to begin. An epic journey that will take them through a world transformed by man's darkest dreams, to the very heart of what it means to be human.

Pretty catchy, eh? It really lured me in, making me want to turn to the first page. But alas, I was eight months pregnant, and had more pressing matters on my mind. The Passage would just have to wait.

Time passed, I went into labour, and gave birth to a beautiful baby boy. For a couple of months, my life consisted of sleeping, breastfeeding, and diaper-changing, but The Passage still sat the bookshelf outside my bedroom door, just waiting for me to pick it up. Every time I passed by and glanced at its dark cover, I looked at it longingly, the emotional impact of the author's words still haunting me.

Finally, I could take it no longer—the pull of The Passage was just too strong. And so, one dark and scary summer night, while my three month old babe slept soundly, I picked up The Passage and started to read. From the very first page, Cronin had me hooked. It was terrifying—brilliant, beautiful, ambitious, and utterly terrifying.

As a writer, I was captivated by Cronin's words and the world he created—strong characters, eloquent prose, wicked plot, I read on, knowing I had a lot to learn from this man, this Justin Cronin. With my heart racing and breaking at the same time, I reluctantly put the book down, knowing that I was supposed to sleep when the baby slept and that in reading The Passage into the wee hours of the morning, I was breaking a cardinal rule.

But once I started, I could not abandon ship, so to speak, and every night, when I collapsed into bed while my baby slept or my husband was caring for him, I entered Cronin's world. My husband had given The Passage a nick-name—"Scary Book" he called it, because that's what it was—a future so horrifying, that at times, I could barely bare it.

I will admit to having mixed feelings about the book—I would look at it on my night table and ask myself—Can I go there tonight, to that very, scary place? And sometimes the answer would be no, and I would pick up another book, and try to escape from Cronin's world, but part of my psyche was always stuck there, wondering what would happen next. Within minutes, I would put down whatever book I was reading, and pick up Scary Book once again.

Cronin's characters are so strong that I did, at times, find myself weeping at the thought of raising children in the dark future that he had envisioned.  In those moments, I had to stop reading, and go and find my beloved husband and child and smother them with kisses and express my love and gratitude for them over and over.  Although my husband appreciated the frequent displays of affection that were the result of entering Cronin's world, he discouraged me from reading Scary Book, saying that maybe it was just too scary for me right now, and that maybe I might do better if I read something a just little lighter.

I agreed that maybe he was right, that maybe a dystopic literary thriller might be too intense for a sleep-deprived, breast-feeding, hormonal new mother, and for a two week period, I didn't read Scary Book at all.

But did my psyche leave Cronin's world, you might ask?

His characters were always in my heart. They entered my dreams. I thought about them while I was in the shower. No, I had already entered Cronin's world—not reading Scary Book was not going to change that. I soon realized the only way out of The Passage was to finish it.

And so I dove in full force, letting the gravity of the tale propel me forward. In the end, I was wrong—The Passage was just the beginning of Cronin's world—of course, there is a second book, The Twelve, and a third to follow.

While I have read Keith Oatley's Such Stuff as Dreams: The Psychology of Fiction and knew that there is evidence to suggest that reading fiction increases the reader's social skills and their ability to empathize, my experience with Cronin's work deepened my understanding of just how much one work of fiction can affect an individual. For even though it has been several months since I have finished it,  The Passage has left its mark, changing my perspective about my life, my relationships, and my world like no other book has.

Cronin shows me what could be, putting into words humanity's worst nightmare, painting a picture so clear and so real and so plausible that you swear that it's already happening. By showing me the horrors of what the future might hold, Cronin has helped me appreciate my life as it is, reminding me that as bad as things might appear to be when my luck seems low and my perspective is small, there is no way they could be as bad as they are in The Passage, and for that I am grateful.

So if you are feeling particularly brave, I dare you to read The Passage.  I double dog dare you. See what you are made of. Read The Passage and change your life.

P.S. My Christmas present to myself was, you guessed it—The Twelve. I'm only on page 28, but so far, I'm impressed. And, get this, I'm still scared to read it—maybe I should call it Scary Book 2.

Posted by Angela Dawn MacKay, Holistic Psychologist, Writer, and Celtic Artist at 4:04 AM No comments: